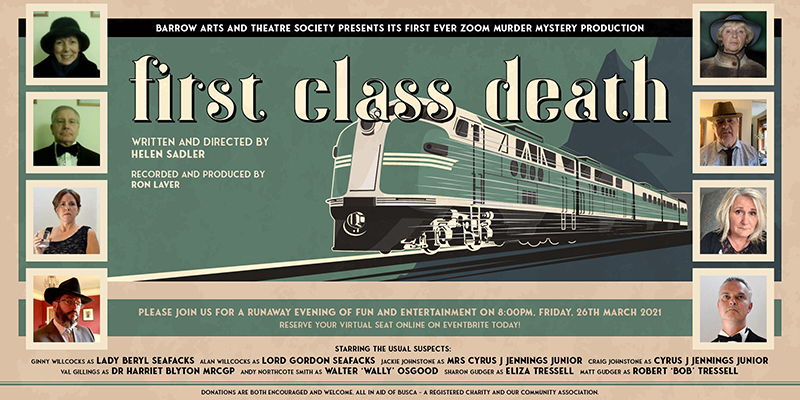 It is 1937. A rather mixed bag of people has embarked on a train from Liverpool's Lime Street Station, bound for London.

In First Class, Ginny Willcocks plays Lady Beryl Seafacks, an all-round good and charitable lady who realises her husband isn’t the man she married, alongside Alan Willcocks playing Lord Gordon Seafacks, a self-made man who has made a fortune form the manufacture of widgets and gizmos for weaponry. Also in First Class, Jackie Johnstone plays Mrs Cyrus J Jennings Junior, who is not at all happy after a dreadful Atlantic crossing, alongside Craig Johnstone playing Cyrus J Jennings Junior, all the way from the US of A with his beloved Genevieve to sign the deal of the century.

In Second Class, Val Gillings plays Dr Harriet Blyton MRCGP, one of very few female GPs in pre-war Britain, on her way home after a visit to her brother and his wife, along with Andy Northcote Smith playing Walter ‘Wally’ Osgood, a supplier of essential supplies and ne’er do well. He jumped the train and hasn’t got a ticket.

In Third Class, Sharon Gudger plays Eliza Tressell, her daughter’s in service in London and is ill. Her husband, Robert ‘Bob’ Tressell was recently been dismissed by Lord Seafacks, is out of work and the world is getting ready for war…

Please join them for a runaway evening of fun and entertainment at 8:00pm, on Friday, 26th March 2021.

Donations are both encouraged and welcome, all in aid of BUSCA - A registered charity and our Community Association.